This week, watching a podcast of Dawn French sharing her wisdom on becoming a sexagenarian (matron!) I noted with interest her advice about self esteem, and how she rued all the time she wasted in the pointless quest to change her appearance. She appears now, blissfully content in her own skin. This gives me hope that the next twenty years might see me finally settling for what God gave me.

Pure infant vanity was captured in a photograph of me age 5, a bare-chested Debbie Harry wanna-be, sporting a set of my mother’s most flamboyant clip-on earrings and singing wantonly into a hairbrush. I thought I was the bees-knees, and was probably singing along to the Bee Gees at the time! The mirror was my friend.

But as I grew, I got gangly, developed a spectacular overbite, and became a funny-looking kid, slipping off the dangly earrings and out of the limelight in deference to the plupmtious English roses in ra-ra skirts and demi-perms.

Instead, I hung upside down in trees wearing mostly corduroy, and a Harley Davidson sweatshirt.  No boy ever caught me in a game of kiss-chase, (even when I ran really slow and pretended to fall over).

Then I got to 13 and my endocrine system made me do funny things like experimenting with electric blue mascara, steaming my face and making face packs. The Body Shop opened a branch in Canterbury, and before I knew it, the preening little glamour-puss had re-surfaced. My mother once told me about how to make hairspray out of sugar water, so I fashioned my straight hair into waves like Cybil Shepherd in ‘Moonlighting’ and squirted it liberally. It set hard as Blackpool rock.

There were the glory days of uni and ‘grunge’, when I cropped my hair, dyed it deep red, and lived in vintage Levi’s and baggy shirts. I don’t recall anything as poncey as a ‘beauty regime’ then, although I eyed the Clarins products in my beautiful posh friend’s bedroom with secret envy. But I spent my spare cash on fags and beer, which must have done wonders for my complexion, because ironically, it was during this time that I was most attractive to the opposite sex.

Six years on, just after the birth of my beautiful son, I recall studying my face in the bathroom mirror and declaring that on his journey down the birth canal he must have taken with him any vestige of beauty I had left in me. A few years later however, I popped out another one, and she really did siphon off the very last dregs of pretty youth. She has grown into such a ravishing beauty that it’s sometimes hard for me not to feel like a fat Mother Gothel in Rapunzel.

I’ve had a creeping realisation that it is time to abandon hopes of ageing fabulously like Jane Fonda who, let’s face it, at 79, looks a bit spooky in a high blonde ponytail and a shocking pink wiggle dress. (She’s currently starring in a film titled ‘Our Soles At Night’ for goodness sake! Where is the wisdom in that?) But before I fully embrace Dawn French’s comfy philosophy, Mother Nature has one last treat in store for me: It’s name is Menopause (said in the same dread tone as you might gasp ‘Godzilla’ or ‘Giant Meteor’)

For a little while now I’ve suspected that the Meno-meteor has been passing perilously close to my metaphoric atmosphere. I’ve googled ‘forgetfulness and the menopause’ (a big mistake), an I’ve started popping 400mg Agnus Castus pills in an effort to stave off symptoms. But a last tweak of the hormonal puppet strings has recently resulted in some ill-advised makeover attempts.

In the absence of a magic flower or enchanted golden tresses I have come to rely on a growing armoury of lotions and potions to stave off the most feared and reviled of beauty problems that is ‘Ageing’.  I have invested a significant share of the £4 billion that we poor deluded British women are now spending on ‘Beauty’ every year. The thing is, I actually know that I’m wasting my time and money. ‘Youth Serum’ is a fairy tale, a myth, and a cruel one that allows cosmetic companies to prey on the vain and the vulnerable. I know that nothing but plenty of sleep, exersise, hydration, good nutrition and sunscreen is ALL I need to guarantee optimal asset enhancement, but the lazy slob within me craves a magic wand, and instant gratification.

Social Media knows just how and when to get my attention. (I had to check my settings to see if they have, along with all my other data,  a record of my menstrual cycle.)  Websites use cookies to such brilliant effect that I recently found myself, as if under hypnosis, drifting into Boots, and blowing £14 on a small tube of blue goo that promised instant firming and toning in a compelling time-lapse Insta Ad.

It was only after glimpsing myself in the bathroom mirror that I came to, and realised I’d been duped once again by the beauty myth, and looked every bit the vain fool I have become. Peeling the stuff out of my eyebrows was a suitable punishment.

There are weak spots in the calendar; two or three days each month when the veil of self-assurance becomes as sheer as a Creme de La Mer BB cream, and my brain desperately grasps at strands of thinning estrogen, saying, “Looking awful E-J. Must try harder”. This was never more tragic than the night I discovered a box of hair bleach in the bathroom cabinet and decided to use it on my healthy, and already expertly highlighted hair. As I came to bed that night, Danny glanced up from his book and said, “Hmmmm….Donald Trump?”

A day later I sheepishly opened the door to my visiting hairdresser, expecting her to berate me for being such a klutz. Instead she was very kind, saying “I think it looks quite nice!” But funnily enough, I decided that the Trump look was just not me, and since then I have wandered the house in the evenings wearing various blue concoctions on my head in an attempt to regain some ashy tones, and a shred of dignity. 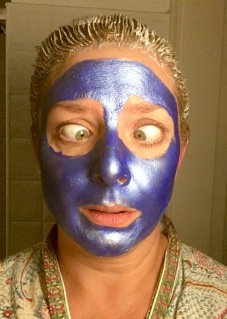 Soon I will submit, resignedly accept my wobbly bits, laugh at my laughter lines, and slip comfortably into that hallowed space occupied by Ms French, and all the wise old birds who’s glowing inner wisdom and self-confidence has replaced those pots and bottles on the dressing table.

But first, there’s a new tinted moisturiser from Origins I need to try…

2 thoughts on “Time to put vanity on the bonfire?”